The target man, a role in Football Manager (FM) I believe can be very effective if used correctly for a number of reasons. I want to give my opinion and look at this famous role. I have used a target man for many years in FM and a striker with a physical presence is always great to have in a matchday squad for numerous reasons.

What makes a good target man? As soon as you hear the role “target man” you instantly think of a towering strong striker. The attributes I would always look for are listed below…

Some of the best target men the footballing world has seen are the likes of Drogba, Ibrahimović, Luca Toni and many more. Do we see these types of players today that had such a physical dominance as well as being gifted with the ball? Drogba one of my all-time favourite players and just a joy to watch, but what made him so good?

A 29-year-old Drogba, I have highlighted some key attributes needed for a real target man to possess. He was a huge reason Chelsea had the success they did he defended from the front and was a goal-scoring machine. He had a flair to his game also that made him stand out and terrorise defenders at ease. Having a player of this calibre playing in the role of a target man was an instant advantage to Chelsea. 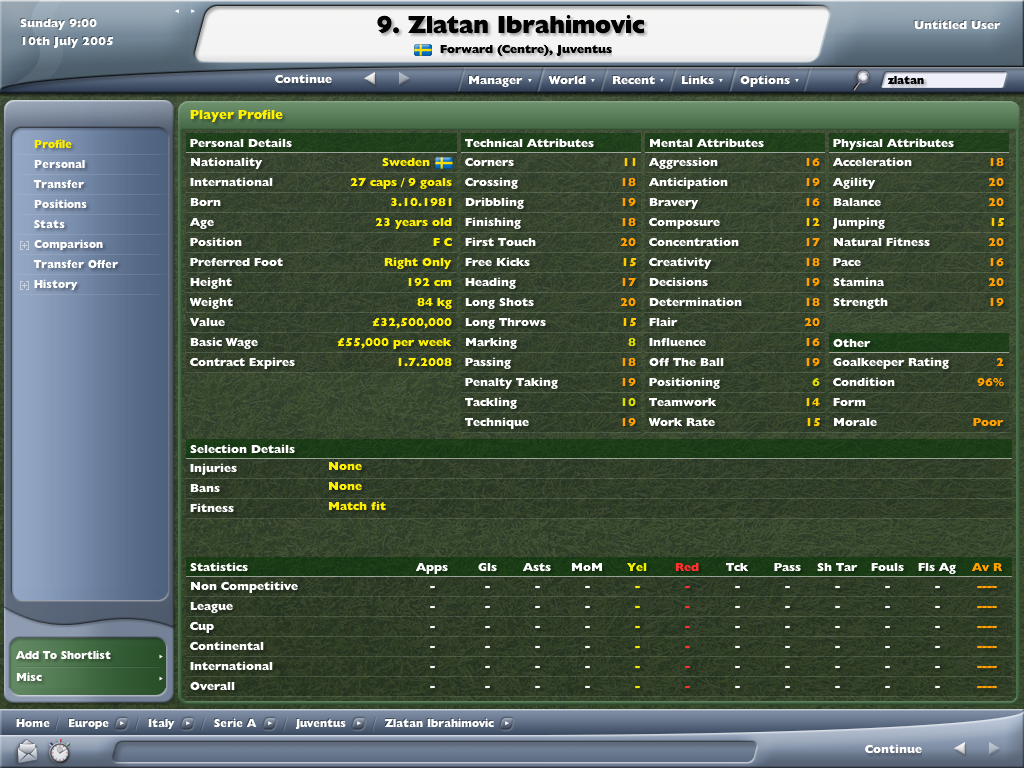 Another legend, the 23-year-old  Zlatan Ibrahimovic, look at those attributes. He was the perfect target man with incredible aerial ability and unstoppable in front of goal, a defenders nightmare. The pace he had for his size was remarkable and you don’t see many strikers of his size have that in their locker. Aggression was something Zlatan had in his game which made him even harder to mark, I love seeing that in strikers, that nasty edge and not scared of leaving in a foot on a tackle to unease your marker.

So what do we want to see our target man doing in a well-run tactic?

Aerial presence – An obvious one is, of course, being lethal in the air making sure he is getting the correct service from your wide areas that will play to his advantages like floating crosses into the box. On the flip side are you in a tight game with a small lead? having him defending from corners and set pieces is a huge help to your defence, don’t always think on how to use him as an attacking threat. Having a striker partner with pace is an advantage so any long balls over the top to the big man can be headed on for through ball to his partner in crime.

Hold Up Play – Another huge part of his game is holding the ball up bringing in attacking midfielders, striker partners and wingers to continue an attacking threat. Whether your tactic is short passing or route one having a strong forward that you can channel balls into is an outlet, especially for your defenders in trouble or with no short pass option.

Goal Scoring – The most obvious one is finishing no matter what role your striker is in you want him to be composed and confident when given a chance on goal. He will more than likely score a good amount of headed goals through a season or goals from close range.

Off the Bench – Defending a lead or looking for a late winner/equalizer? Bringing on the powerful centre forward can do both. the hold us play as we spoke about before and wasting time by going into corners and using his strength to the teams advantage. Defending last gasps set pieces from the opposition is another reason to get him on the field. You find yourself losing by a goal late on but you’re on top throw him on and let him be a nuisance from attacking set pieces.

Instructions I like to use when using a target man, depending on the wingers you use and their qualities you can focus play down the wings if suitable. 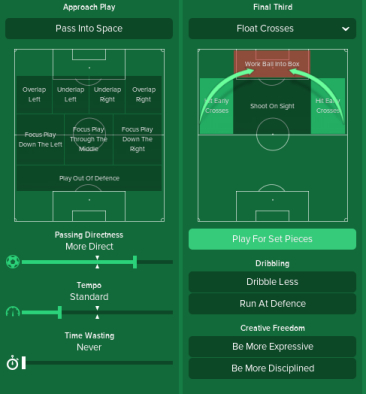 having a tactic with players around him that make the target man more of an advantage is obviously something you need to work out.

Wingers that can cross a ball is what makes your target man deadly in front of goal, give him top service and he will win more headers than not. When the striker has the ball at his feet the wingers want to be linking up with him as soon as possible so good stamina and acceleration are 2 good attributes to hold.

Attacking midfielders are hugely important to have in behind the big man, linking up with creative players is a huge must for a target man so when he releases the ball to them you can be certain to keep the attacking threat going.

Striker partners are a personal choice and depend on what other standards your striker is at. I would never play two similar strikers, when I was young my coach used to love a little and large combination and I used that in FM over the years and had some really good partnerships happen. A speedy second striker would gain more advantages when attacking and would work well. Playing him alone is also perfectly fine and effective.

Thank you for reading this post and when setting up a tactic I hope you can set up a tactic involving a target man. Show me your current target man whether it be a newgen or a real-life player, that’s bagging your goals by tweeting me.

View all posts by dazzafm