Here we are once again season 2 has been and gone, have we competed with Boca have we passed them? There is a lot to look into in another jam-packed season in Argentina. This post will be all about season 2 and then in a few days time, we will have an in-depth look into preparing for season 3. Velez so far has been one of my favourite Football Manager saves and I have played a lot I hope this level of excitement keeps going.

The last time you joined me we were sitting comfortably in second place after 5 games, of course behind Boca. Throughout this save we have been second for the majority of it and its something I’m proud of and makes me want to go that step further.

The winter window made us lose our superb young left back in Ortega, he has been outstanding from the day I took over.

The young 21-year-old went for a whopping £7.25m to Spanish side Sevilla. Finance wise It’s a no-brainer but its a huge loss for us and dents our chances for the championship. He also wanted to leave and upset team morale a lot which made us go on a bad run for a small part of the season, that really annoyed me.

The winter window saw me sign 2 players for the first team and promote a young left back from the reserves to replace Ortega.

Let’s take a look at the youngster I believe has the potential to fill Ortega’s boots.

Felipe Di Lena is an 18-year-old who has had some very good reserve performances and with finances tight and me looking for youth in this save I believe he deserved a chance in the first team. Since coming in he has been in a rotation system to slowly guide him into life in the first team, he has not let me down and next season could be my first choice left back.

Now for players that we spent a little cash on!

The champions Boca let me take on loan Gonzalo Lamardo a very versatile midfielder who is surplus to requirements for Boca but a great addition for us says a lot on how far ahead they are from us. Lamardo brings a great work rate and a great eye for a pass he had a solid half a season for us and signing him permanently would be a great idea but I doubt finances will allow that.

My scouts since I joined have been very poor and at the end of this season I’m looking to remould my scouting system but they came up with this gem in Nathan a 20-year-old Brazilian striker. Since joining us he has scored an incredible 9 goals in 9 appearances and takes the teams 2nd best scorer in half a season. I can’t wait to see if he can produce this next season. We got a bargain for Nathan only costing us £675, yes literally £675 not a bad piece of business at all.

I just want to add I looked long and hard in the winter window to bring in 1 or 2 European players from the English league, why? I have noticed there are literally near to none in this league and it made me think if I had one or two would they bring something different to get close to Boca. I had 4 bids accepted for players that I believed would improve my team in the positions I needed, this wasn’t just for experimental purposes I searched long and hard for the right players. The 4 players all declined contract talks due to not wanting to live in Argentina and said it wouldn’t be up to their living standards. Next season I will try again to add 1 or 2 EU players from the English league. 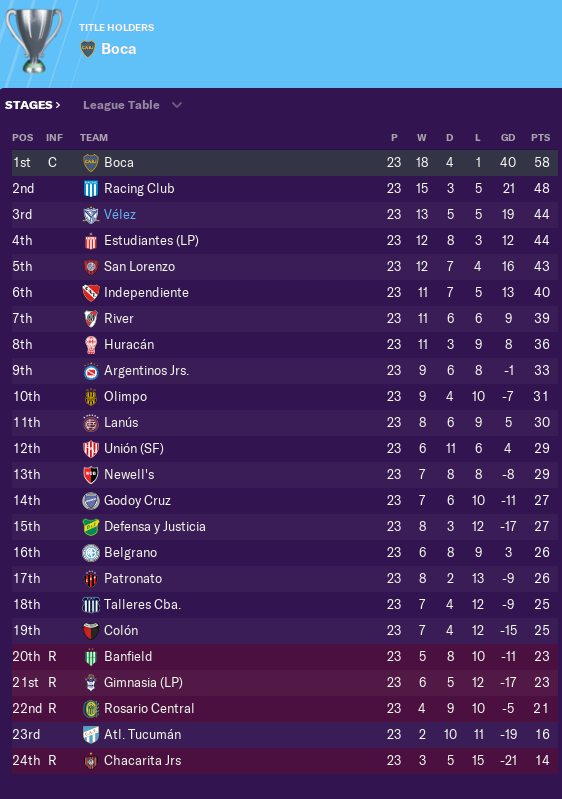 The second season sees us place in 3rd place after being 2nd for the majority of the season I was a little upset to drop down a place but it’s still a cracking season from a very young squad. We can see again just how far Boca are ahead still we just can’t compete with them it’s annoying but I will get there I’m so determined to lift this league trophy in the future. I have had 2 awesome seasons now and this has seen teams such as West Ham and my beloved Leicester offer me job interviews, I declined both I’m here for the long haul. The season 3 preparations blog will definitely be worth a read I’m strongly considering making some big changes in a few major areas to see if we can get any closer to the powerhouses of Boca. The changes I have in mind are a huge risk since I have taken over I have changed minimal things tactical and staff and it’s been working very well but something needs to happen to try and get in a title race. Velez finances are an issue but something I’m powerless over so I need to forget that and change things I have the power to do so, watch this space.

The season has finished but the Copa Libertadores is only 2 games in and we sit in second place with 2 comfortable wins, Emelec and Olimpia are very poor sides and we beat them convincingly with a weakened team out. I will keep you updated on this hugely important competition as it goes on. I may even get some Twitter updates on the cup between write-ups.

This season saw many great performances, we need to remember how young this team is they still have so much to learn I just hope we can keep hold of them but I do fear the worse. I will show you my top 3 players from this season like I do every season in my reviews they might not be the top 3 ratings but ill explain why to me they were so important. 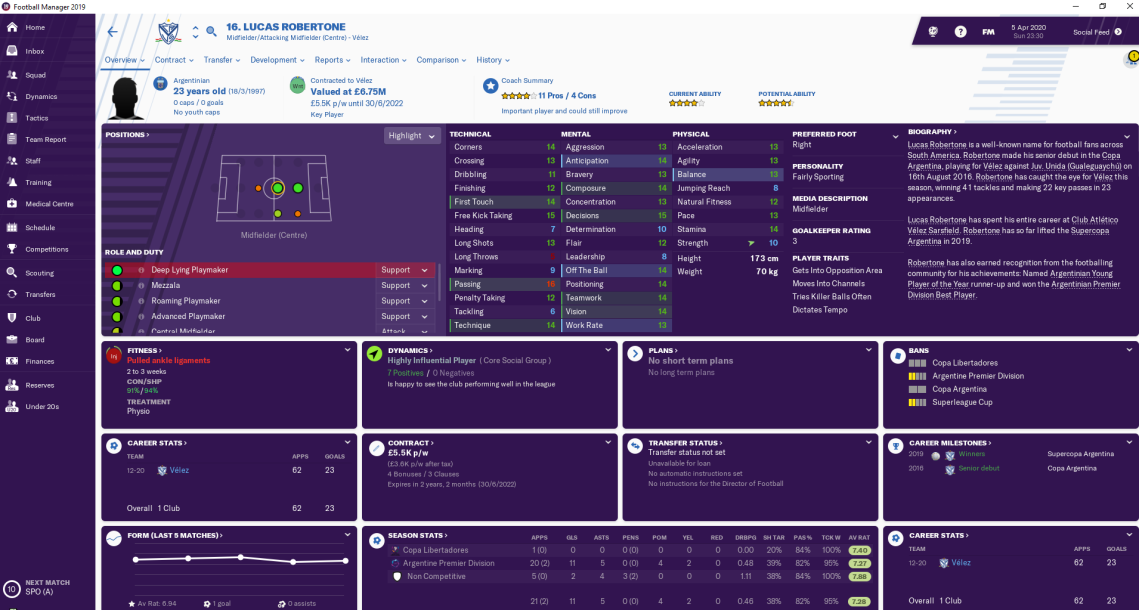 Robertone was a top performer last season and again this season he is the number one guy, he literally does everything scores, assists and wins the ball back a lot. As you can see he is a wanted man and I can see why top European clubs want his signature. Keeping Robertone here next season will be the biggest business we do in preseason. The big games are where you want your top players really showing their class and he does that he never hides and being our main central midfielder he makes the team tick if he plays well the team plays well. He has completed 95% of his tackles in the League this season and that’s a stat I love about him. 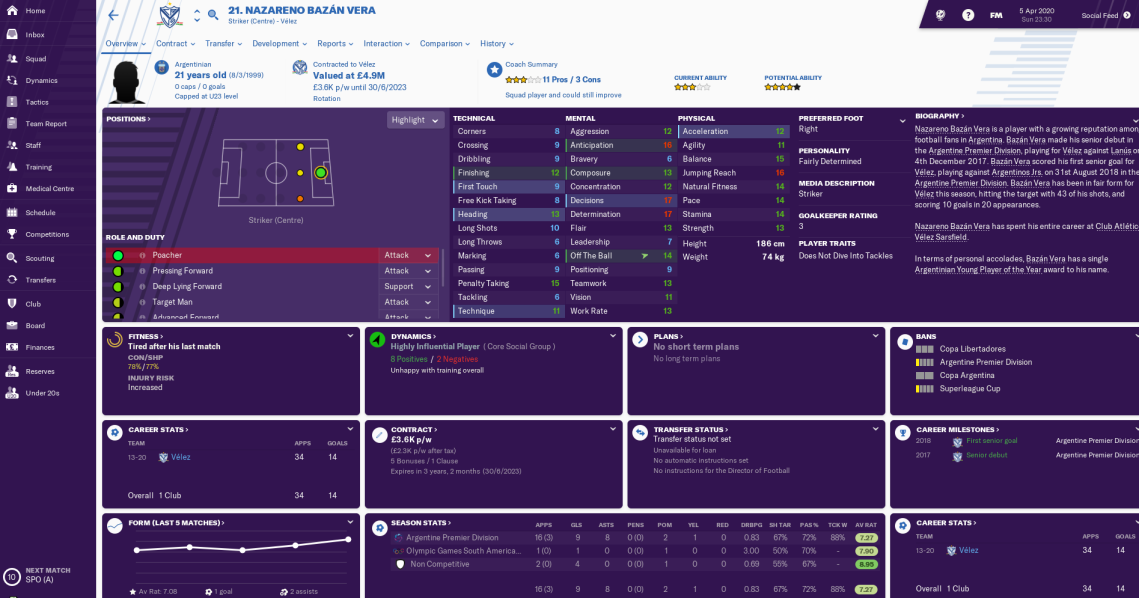 Vera is our top goalscorer this season with 9 goals but with 8 assists he has proven in his first season in the first team, he is more than ready. Salinas last season bagged 15 goals as our main striker but he turned 33 and I said in my last blog he wouldn’t be the same this season, Vera filled his boots brilliantly but with the new lad Nathan breathing down his neck for his place I think this will make for more good performances from the youngster. I hope this wasn’t a one season wonder mainly because I doubt I’ll have the money to buy a top striker in the next window, so keeping Vera in a good training regime for improvement is key. 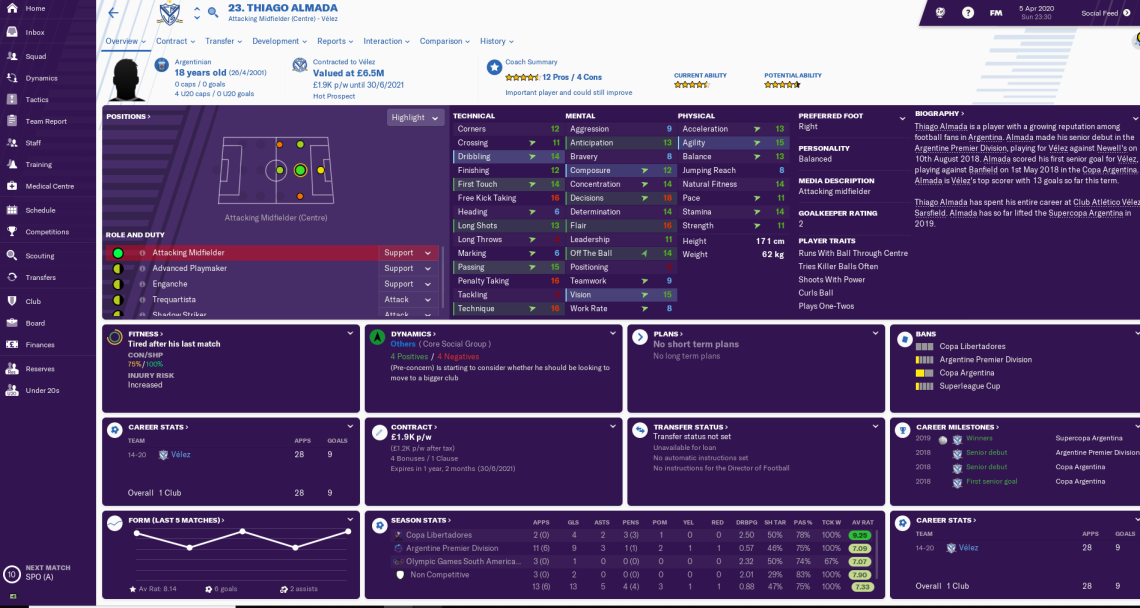 This guy I said was one to watch in this save, last season he played a very small part and I used it to work him in ready for either season 2 or 3. This season I gave him his chance and he repaid me with an outstanding season, hard to believe he is only 18. I can just sense there will be major interest this preseason, teams would be crazy not to want him. Almada staying would again be a massive boost for the club going into season 3. Playing him behind the striker is by far his strongest position and he thrives on making deadly runs and defence ripping passes, he and Vera link up really well long may it continue.

Overall It’s been another strong season and have we overachieved? now I’m beginning to believe if we keep this young team together we can make something special happen for the Velez fans. The hardest part will come this preseason It’s the first time since losing Vargas that top teams sniffing around our talents. I only get 15% of each player sale to my transfer fee so keeping them is a must, whoever I lose will more than likely have to be replaced with a weaker player or a youngster from the reserves.

There are some massive decisions for me before we begin season 3 and I have to get every decision spot on and start making Boca worry about us.

Thank you for reading hope you enjoyed this post and I will see you again when we prepare for a new season in Argentina.

If you missed it I’m now a part of the FM-base blog team with many other talented Football manager writers, so click the image below to check out the new team.

View all posts by dazzafm